The buildings and related information about the original and prior campuses that became SUNY Potsdam.

Crane Becomes a Part of Normal 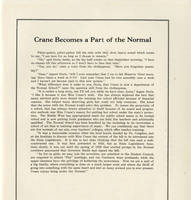 Snell Hall- It originally housed the Potsdam Normal School, and was the Potsdam State Teachers College until 1958, when it was given to Clarkson…