TM: It’s interesting to go back in the history of Potsdam and I think I’d start by telling a story. When I came on board in 2000, one of the first events we had was...we used to have a scholarship luncheon, so anyone who had won a scholarship, we would invite the families up to do a luncheon, we’d do it up on the eighth floor, and it was always nice, it was a nice little event. So it was the scholarship luncheon, and I’m doing my first speech pretty much, and I’m rockin’ and rollin’, and I’m having fun, talking about why I came to Potsdam, what the staff wanted to do, how we were gonna work with them, and make them feel like a community and how it was really nice to work with the president, and the director of PR was standing behind me. What I didn’t realize was that I referred to SUNY Potsdam as “Normal School,” I referred to it as “College,”, “Potsdam State,” I did them all, except “SUNY Potsdam.” At the end of the speech, there were pleasantries, there was a picture thing, and at the end of the speech, the director of PR came and he put his arm around me, and he choked me, and he’s like, “Don’t ever do that again.” And I said, “What?” He goes, “We’ve gotta have an identity.” And I’m like, “Well, what do you want the identity to be?” Truthfully, you walked around campus, in one room you would see ”Potsdam College,” in another you would see “Normal School,” in another room you’d see “State,” it was crazy around campus back then, and it was a struggle, what’s our name gonna be? John Fallon, who was president at the time, really really felt that, because he came from the Midwest, he wanted to be “Potsdam College.” That was kind of his vision, because all the great schools in the Midwest are “College.” So we turned around, and we were like, “Really?” and Scott really wanted “SUNY Potsdam,” and really, there was this whole rigmarole, and I think that for a year we debated it, we went round and round in circles, and I remember there was a picture in the Raquette, it was phenomenal, actually it was in the Watertown Daily Times. We had just decided on SUNY Potsdam, everyone was supposed to use the colors, you know, maroon, the gray, everything was set, we’d come up with the system of what color was what, and it was a year, so we had just decided this, and there was a picture in the Watertown Daily Times of our first Lacrosse game that year, and all the guys in the picture were wearing black pullover vests, like it was raining out, and they said “State” on the back of it! It was so funny to see everybody go mad about why we liked that, I mean people in athletics thought we should be “State.” So really, it took four or five years for everybody to come down on SUNY Potsdam, even John Fallon eventually came down on SUNY Potsdam, and since then, that has been kind of where we’ve been, but still, you speak to alumni all over, “Oh, you work at the Normal School,” you know, “Oh, you work at State.” That’s fine, you know, and we’re always going to have some of that, but I think our image, in the public, is SUNY Potsdam. 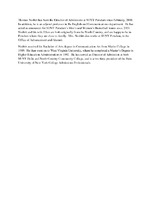 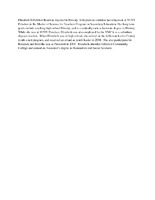