History of Sisson Hall and the Sisson Family

Perhaps no extended family became so thoroughly integrated into the life of Potsdam as the Sissons. George Wing Sisson and his wife Sarah Hamilton Sisson moved from Glens Falls to Potsdam in 1867. After being involved in the lumber business, he and others founded the Racquette River Paper Company in 1892.

Named After George Wing Sisson, Jr. 1862-1954
who succeeded his father as president of the Racquette River Paper Company
Businessman - Researcher - Expert in fields of paper and agriculture - Class of 1881 - President of Board of Visitors 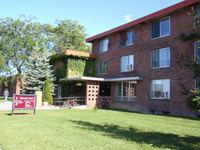