A collection of documents, photographs, and researched data relating to the history of the current campus of SUNY Potsdam.

It was reported on March 15th, 1993 that the floors in Bowman West were flooded and the bathroom had been vandalized-it is assumed someone from Cortland was the cause- bathroom said "Cortland Rugby kicks Potsdam Ass"

A collection of materials relating to the Crumb Memorial Library, named after Dr. Frederick W. Crumb after his sudden death in 1967. 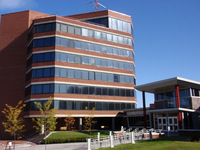 Benjamin Raymond- 1774-1824
Potsdam was first settled by him
he was the founder of St. Lawrence Academy-Raymond hall is named after him 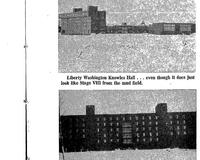 Knowles Hall was completed in 1966 and was named after Liberty Washington Knowles in 1967. He was one of the first families here in Potsdam. He was Potsdam's first lawyer.

the past was given now the present is shown

Perhaps no extended family became so thoroughly integrated into the life of Potsdam as the Sissons. George Wing Sisson and his wife Sarah Hamilton Sisson moved from Glens Falls to Potsdam in 1867. After being involved in the lumber business, he and…

originally a college…
View all 20 items