Year Completed: 1951
named after Amelia Morey 1842-1911 who was the
Principal of intermediate grades and preceptress at Potsdam Normal School - Outstanding teacher and administrator

In 1869 Amelia Morey joined the Potsdam Normal School faculty in a brand new building which had replaced the original St. Lawrence Academy. She had just graduated from the Oswego Normal School. Earlier she had attended the Susquahanna Seminary and Binghampton Academy. At age 16 she had passed the necessary examinations and taught her first term of school. She coped with 70 pupils "to the satisfaction of all except herself."

Morey was principal of the intermediate department in the Practice School, with responsibility for instruction in arithmetic and grammar. She was noted for her executive ability in managing the department and was made Preceptress of the Practice School in 1876. Although Morey was offered other positions, often at higher pay, she chose to stay in Potsdam. She retired in 1901; Morey Hall is named for her. 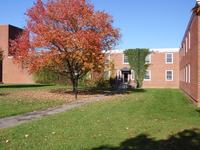