A sketch of the first building of the St. Lawrence Academy established in 1816.

This is the only known rendition of the first building of the St. Lawrence Academy, since it was replaced by the North Academy building in 1826 before photography was available. The new building was needed because of increased enrollment. As matriculation increased students enrolled locally, from nearby counties, and also from Canada.

The St. Lawrence Academy opened with an enrollment of 42 pupils. Nahum Nixon was hired as principal and teacher. A local Board of Trustees oversaw the curriculum, finances, and personnel of the Academy. By-laws were adopted that included conduct, curfew, and reference to the Sabbath Day. Tuition was determined and paid each quarter with the amount calculated according to which courses were taken: Reading and Writing were each $2.50, English Grammar, Cyphering, and Mathematics were $3.00, Dead Languages were $3.50, and the most expensive courses were Logic, Rhetoric, Composition, Philosophy, and French, each course cost $4.00. Students also paid about $2.50 per week for room and board in local homes. 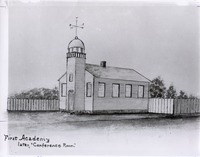